Lately I’ve been on a bit of Mitford sisters spree… If you’re not familiar with the name, the Mitford family is one of minor aristocratic standing in England, made famous by the six Mitford sisters. Born between 1904 and 1920, the six sisters are fascinating due to the various paths they walked… 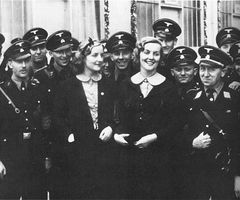 Picture of Unity and Diana, via We Heart It.

Nancy the eldest was a novelist who spent many years living in Paris, Diana was a society beauty who married first a Guinness (as in heir to the brewery fortune), before marrying the Fascist leader Oswald Mosley, Pamela lived a quiet life in the country, Jessica (Decca) became a Communist and moved to the US, Unity was a fervent supporter of Hitler and eventually died from a wound she gave herself when Britain declared war on Germany and Deborah married Andrew Cavendish, becoming the Duchess of Devonshire. Phew.

What’s particularly interesting about the sisters is that their correspondence between one another covered a hugely influential period in history, not to mention their divergent views. All of their letters are fascinating to read, including those of Deborah (referred to by Nancy as ‘9’ as representative of her reading age), who helped turn her husband’s ancestral home, Chatsworth, into a profitable operation in the wake of ruin and huge death duties owed. They all led remarkable lives, and these letters, published in a collection, make for fascinating reading.

I also whole heartedly recommend Nancy Mitford’s fiction – she has a really dry sense of humour that’s very engaging, often sending up elements of English high society. Try any of the below:

Click on any of the book covers to link to the Amazon pages.