So this weekend has been pretty fantastic, certainly took away my post-holiday blues!

Saturday’s film night in Dolores Park was really fun, if you live in the city you should definitely check it out! Everyone brings picnic blankets, drinks and things to eat and sets up on one big hill in the park (handy as everyone can see the screen). In true SF style there are dogs pottering around with their owners and the omnipresent smell of pot – suffice to say it’s a fairly laid-back scene. I didn’t take any pictures of the setup as I was there on a date and that would’ve been weird but we had a blast, enjoying wine & chocolate mousse alongside Jaws! I’d forgotten how retro the special effects in this film are (which is understandable given that it was released in 1975!) but it was pretty hilarious at some points. Here’s a shot of Steven Spielberg in the ‘jaws’ of his shark, from here….

The next film they’re playing in Dolores Park is going to be Top Gun (err, epic!) on the 24th of September. Full schedule here, if you go remember to take some yummy things to eat and drink and wrap up warm as it’s pretty dang chilly up there. The films start at dusk but get there earlier to get a good spot for your picnic blanket!

Then yesterday we headed over to the Greek Theater in Berkeley to see the incredible Adele in concert. I think she’s probably the best artist I’ve seen live, her voice is phenomenal and she’s a real character. Adele started with one of my favourite songs, Hometown Glory, and ended with my other two favs – Someone Like You and Rolling in the Deep. Amazing. 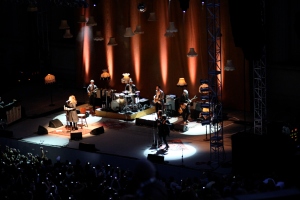 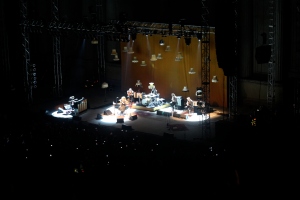