Today I am recovering from the self-induced trauma that was a very large meal at The Cheesecake Factory last night. My team at business school won a particular project and as our reward we ended up with a $100 gift certificate for The Cheesecake Factory – sweet! In San Francisco it’s right at the top of the Macy’s store in Union Square so it’s a pretty cool location, but the place is an absolute zoo. It was heaving at 7pm on a Monday night but we were very lucky and managed to find a table in the bar area, niftily avoiding the 1 hour wait. I thoroughly enjoyed my first C.F. experience but I certainly wasn’t prepared for the portions – especially the slice of red velvet cheesecake that totally defeated me! Oh well 🙂

Anyways, moving on… One of my absolute favourite things about holidays is the opportunity to sit and read all day – in Palm Desert this involved me sitting on the steps in our pool to try and cool down – total bliss.

Here are the books I got through in a week: 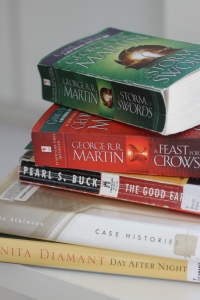 George R. R. Martin, A Feast for Crows and A Storm of Swords, from the box set I bought from Amazon. These are 2 of the sequels to A Game of Thrones which has now been turned into a TV programme. They’re pretty good holiday reads – lots of drama and adventure, although sometimes I wish there were sightly fewer sub-plots. The book is told from the point of view of a particular character each chapter and I feel like the number of storytelling characters has multiplied exponentially, but they’re still fairly entertaining.

Pearl S. Buck, The Good Earth. This was one of Oprah’s Book Club picks and the writer was a Nobel Laureate. It tells of a Chinese family at the cusp of the modernization of China, beginning with their humble farming roots and moving through to the next generation, who do not wish to live the lives their parents led. It’s quite a sad story but it looks at a really interesting period of time, especially if you’re interested in China.

Anita Diamant, Day After Night. I am a big fan of Anita Diamant, both of her fiction and also her non-fiction books. When I was traveling through the Middle East, I bought a copy of Living A Jewish Life in Jerusalem to learn more about the traditions of Judaism (as I studied Arabic at university I was pretty well versed in Islamic customs and beliefs, but I was much less familiar with Judaism). It was a really interesting read, not at all preachy, and did a great job of describing things such as the religious festivals, the different ways in which people follow kosher diets and so on. Day After Night tells the story of a group of girls who have survived the Holocaust, but are in a camp in Palestine as the British and the rest of the international community are still debating over the right of Jews to make Israel their homeland. It’s a pretty good read, I liked The Red Tent even better.

Kate Atkinson, Case Histories. This was a bit of a random choice for me, it’s about a private detective looking into three different cases – a missing person and two murders. It’s pretty interesting and there are some twists in the tale.

Anyone read any good books lately?