For years I avoided buying nice sunglasses as I had a habit of abusing all of mine – leaving them loose in the car, or my bag, forgetting about them being somewhere and then squishing them somehow…. I wasn’t too upset whenever I mangled a pair of sunnies from the high street but I didn’t want to deal with the trauma of ruining a decent pair! However I’d been quite tempted by the idea of a pair of Ray-Ban Wayfarers for a while – I love tortoiseshell sunglasses (I think its very flattering on most people) and the classic style of the sunglasses. After realizing that I’d kept the same cheap pair alive for a couple of years (something of a record), I decided that I had the potential to turn over a new leaf and be a responsible sunglasses owner 😉

So first I got my Wayfarers…. 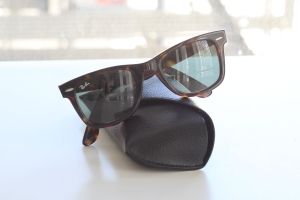 Then as these things have a habit of doing, the Wayfarers were accompanied by a pair of Aviators… 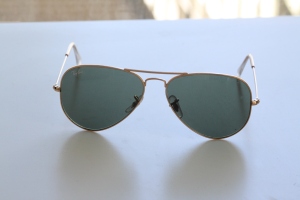 I love both pairs equally and am especially appreciative of the lenses – my previous glasses (Guess ones I think) were pretty dark, so if I was wearing them whilst driving, I’d have them off and on a million times if it was an overcast day. Ray-Bans seem to block out the sun whilst still keeping everything quite bright, which is awesome – you can leave them on if it’s just a bit bright outside instead of faffing around with them. I also love how classic and versatile both pairs are, and how they can be worn with both dressy and casual outfits.

I’m kind of itching for a pair of silver aviators too now….